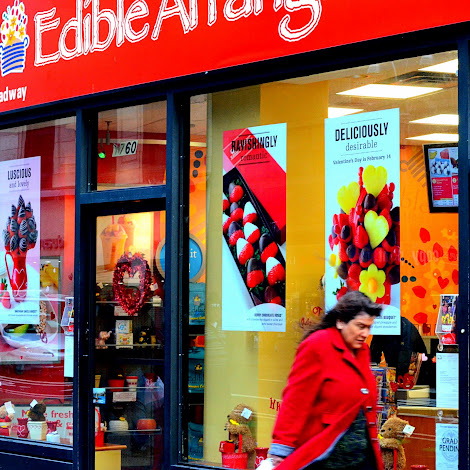 A sexual and religious harassment lawsuit against Edible Arrangements and founder Tariq Farid highlights concerns, which have been made in the past.
Tara Perino brought the lawsuit on October 18, 2013, alleging that Farid:

developed and maintained a workplace in which women are treated in a disrespectful and chauvinistic manner, and in which persons of a South Asian ethnic background and persons known or perceived to be adherents of the Muslim faith receive favorable treatment

Farid and his brother, Kamran Farid (Edible Arrangements’ Chief Operating Officer), at all relevant times hereto have been the two trustees of a foundation called the Farid Foundation, operated out of the same location as Edible Arrangements. Farid Foundation makes significant contributions to Islamic causes and organizations,  including the Farid Foundation Pakistan; the Salma K. Farid Academy; Islamic Circle of North America Relief; the Muslim Coalition of Connecticut; the Inner-City Muslim Action Network; the Wallingford Islamic Center; Masjid AI-Islam; and the Islamic Association of Southern Connecticut. The funding for these donations is derived in large part from donations by Farid and his brother, and by Edible Arrangements and its affiliated entities

As claimed in the Perino lawsuit, one of the charities funded by Edible Arrangements is Islamic Circle of North America (ICNA), based in Queens NY.
The head of ICNA at the time the suit was filed was Ashrafuz Zaman Khan. Both Khan and ICNA have a checkered history, according to The Investigative Project on Terrorism:

One leader, ICNA New York President Ashrafuz Zaman Khan, is alleged to have carried out war crimesin the name of Maududi’s violent pan-Islamist ideology.
Open support for terrorist causes was available on the websites of regional ICNA branches, even after 9/11. As late as November 2002, the ICNA Southeast Zone website linked to the websites of Hamas, Hizballah, and terrorist organizations fighting in Chechnya, Afghanistan, and the Pakistani-Indian disputed region of Kashmir. Among its short list of recommended Islamic charities was theIslamic Society in Gaza, which openly touted its connections to Hamas.
The group’s magazines and conferences similarly promote connections to violent jihad and terrorist organizations going back dozens of years.

On November 3, 2013 (less than 3 weeks after the Perino suit) Khan was sentenced in absentia for the torture and murder of 18 intellectual leaders during the Bangladesh war for independence of 1971.
The ICNA controversy is not the first to touch on Edible Arrangements. A previous support of Islamic Relief Worldwide (IRW) caused criticism after the Israel Ministry of Foreign Affairs linked IRW to terrorist activities.
Tax returns of the Farid Foundation show a range of worthy charities supported by Edible Arrangements, including local soup kitchens and hospitals. And the ties to controversial charities and Pakistan have not stopped Edible Arrangements from opening a store in Mumbai, India.
But the timing of the Perino suit relative to the Ashrafuz Khan conviction is an embarrassment to Edible Arrangements, and the Perino allegations themselves are serious.
According to the Complaint:
The federal lawsuit has been delayed by the withdrawal of Farid’s previous attorney and last week the new attorney asked for an extension of time to respond to Perino’s discovery demands.
Tariq Farid was named by Ernst & Young “Entrepreneur of the Year 2009, Metro NY Category” and also named by the International Franchise Association as its 2009 “Entrepreneur of the Year.” That same year, the Anti-Defamation league was warning the public about ICNA and the 2009 Edible Arrangements application for prospective franchisees warned that:

Applicant authorizes Edible Arrangements and its assigns to start an investigative consumer report (including information as to Applicant’s character, general reputation, personal characteristics and mode of living investigation of Applicant’s background in accordance with anti-terrorism legislation

In making the award to Farid, the International Franchise Association recognized the charitable efforts of Farid:

Farid founded the Salma K. Farid Academy, Foundation and Welfare Center in his efforts to contribute to the community. The academy is a not-for-profit school for the Muslim community and the other entities provide support for those in need.  Farid is also a member of Deen Inc. New Haven, which aims to revitalize the inner-city neighborhood.