Employment at franchised establishments in the United States fell by 5,700 jobs at the same time other parts of the economy saw strong job growth in September.

September’s figure in hiring losses for franchises is not an isolated occurrence. This year franchise establishments have had the highest number of job losses since ADP Research began compiling its National Franchise Report in May 2011. Prior to 2018, February 2012 was the last time that the national franchise report showed any kind of drop in jobs for franchises. This year, with the economy considered at full employment levels, franchises have already had three months in which hiring declined — and there is still a quarter left in the year.

The gains and losses from the past twelve months are also more volatile (see chart), with losses greater and peaks a little higher than the prior year.

Franchised restaurants saw a loss of 4,800 positions, while franchised hotels experienced a 1,600 job drop in September. Contrast that with employment at auto dealerships, which is a franchise sector known to provide employee benefits, healthcare and better-than-minimum-wage entry positions, which had an increase of 3,200 positions over the month before. 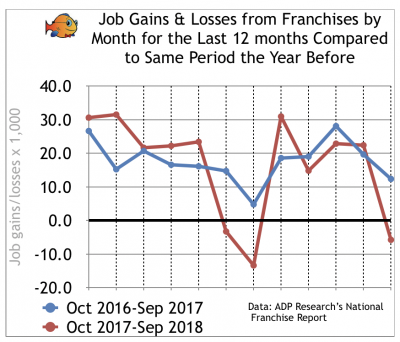 Mark Zandi, chief economist of Moody’s Analytics, pointed out in a conference call this morning that Amazon announced it was increasing its entry level wages to $15 per hour, which is more than double the federal minimum wage. “It is indicative of how tight this labor market is,” said Zandi.

He anticipates that this will put increasing pressure on employers that employ lower skilled workers to also raise their wages. “I fully anticipate wage growth accelerating as we move to 2019.”
While franchises struggle with hiring in a tight labor market, the U.S. economy overall continues to have wonderful news.

“There are more open job positions now in the economy than the (number of) unemployed,” said Zandi.
Private sector employment increased by 230,000 jobs from August to September, according to the September National Employment Report from ADP in collaboration with Moody’s Analytics. The report, which is derived from ADP’s actual payroll data, measures the change in total non-farm private employment each month on a seasonally adjusted basis.
Economist Zandi added the caveat that the job report did not include empty positions caused by the evacuation of the Carolinas by Hurricane Florence. “ADP did not pick up Hurricane Florence,” said Zandi. He estimates between 25,000 to 30,000 jobs would need to be trimmed from September’s private sector employment figure. That still would leave the figure at or above 200,000 jobs, which is still a strong month.
“The labor market continues to impress,” said Ahu Yildirmaz, vice president and co-head of the ADP Research Institute. “Both the goods and services sectors soared. The professional and business services industry and construction served as key engines of growth. They added almost half of all new jobs this month.”
Small businesses that have under 50 employees had a change of employment of 56,000 more jobs over last month. Most of those job additions were in service-providing small businesses.
“The job market continues to power forward,” said economist Zandi. “Employment gains are broad-based across industries and company sizes. At the current pace of job creation, unemployment will fall into the low 3 percent by this time next year.”

What Does Restaurant Refranchising Really Mean?